With home loan interest rates dropping, is it time to pull the cord? 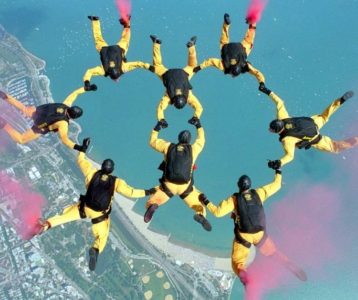 Fixing your home loan while rates are dropping is a bit like pulling the ripcord on a parachute. If you do it early you’ll get a steady ride but may miss out on a bit of action. But if you leave it too late things might get a little messy.

To fix the rate or not?

That seems to be the question on a lot of people’s lips at the moment.

We’re just a few months into 2019 and already 44 lenders have dropped rates on more than 500 fixed-rate home loan products.

These discounts aren’t just being offered by smaller lenders trying to attract new customers, either.

Commonwealth Bank, Westpac and NAB have all announced significant fixed rate cuts, while ANZ recently offered a discount to the headline rate on its flagship variable rate product.

To fix or not to fix?

When there are so many lenders scrambling over each other to cut rates, a question we often hear from clients goes something along the lines of: “Is now a good time to lock in a rate?”

While we’d love to be able to give you a definitive answer on this, the fact of the matter is that it depends on your individual circumstances, preferences and home loan.

Let’s quickly run you through a few important considerations below.

What will the RBA do?

The first factor to consider is that these cuts are being made out-of-step with the RBA.

However, speculation of a near-future cut to the cash rate has ramped up, with the RBA’s April meeting minutes revealing there was an explicit discussion of what it would take to make a cut.

Some economists, including AMP’s Shane Oliver and NAB’s Ivan Colhoun, predict the RBA will cut the official cash rate twice to 1% before the year’s end.

Furthermore, the RBA will likely come under more pressure to cut interest rates at their next meeting after inflation fell further below its target band, the ABC reported this week.

With all that said, nothing is certain. It wasn’t too long ago that most pundits were predicting that the RBA was going to move the cash rate upwards rather than downwards.

The pros and cons

Locking in a fixed home loan means that it doesn’t matter whether or not the official rate goes up or down, you won’t be affected.

It can give you a sense of clarity and certainty, and as such, can help you budget and plan ahead for up to the next five years.

You might prefer a fixed home loan rate if you:

– are concerned that you would be unable to make your repayments if rates were to rise.

However, you might prefer not to lock in a rate if you:

– are confident interest rates will continue to fall over time

– don’t mind having some unpredictability in your financial planning

– prefer to go with market rates.

Give us a call

If you’re still unsure on what’s the best option for you, or you’d like us to run you through some of the home loan rates currently on the market, then give us a call.

As we touched upon earlier, lenders have dropped rates on more than 500 fixed rate home loan products so far this year, so the market is constantly shifting.

We’d be happy to look at your current home loan and run you through how it compares to some of the other products on the market.